QUINOA - WHY EVERYONE IS EATING IT 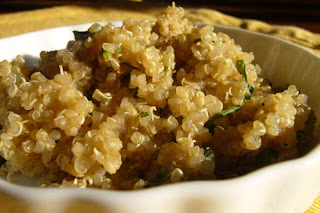 WHAT IS QUINOA
Five years ago, I had never heard of quinoa (pronounced Keenwah), but today I eat quinoa at least once a week.  I would imagine you have all heard of quinoa by now, even if you haven't eaten it quite yet.  While quinoa may be new to our plates, the Incas began eating quinoa as their staple food over 5000 years ago in South America.  The Incas called it "the mother of all grains".  Quinoa is widely considered to be a whole grain, but it is actually a seed from a plant related to the weed, goosefoot.  Quinoa is now called a superfood by many because it is high in antioxidants, phytonutrients, fiber, protein, vitamins, minerals, and enzymes.

BENEFITS OF QUINOA
(1) Quinoa is high in vitamins and minerals and blows the competition (corn, potatoes, wheat, and rice) out of the water with nutritional benefits.  Quinoa is chock-full of micro-nutrients.  It is a good source of manganese, copper, calcium, phosphorus, magnesium, potassium, iron, copper and zinc.

(3)  Quinoa is a great source of fiber to keep that digestion operating and moving well.

(4) Quinoa is gluten free and so it is a great option for anyone with gluten intolerance or celiac disease.  Truth be told, everyone should have less gluten in their diet.


(6) Quinoa may be an effective way to use food as your medicine when preventing and treating certain diseases such as diabetes, insulin resistance, and some forms of cancer.


HOW TO COOK QUINOA
I hear people say all the time that they don't know how to cook quinoa.  Well, I am here to tell you that if you know how to cook rice, pasta, or cous cous, then you know how to cook quinoa.  The general rule is 1 cup of uncooked quinoa to 2 cups of liquid (either water or vegetable stock).  One way to boost the nutritional value of quinoa and to make it even more digestible is to soak and sprout your quinoa before cooking it.  What I usually do is soak my quinoa overnight in water.  Then, in the morning, I drain the quinoa, rinse and put it back in the bowl and let it sit on the counter in the sun until the evening when I am ready to cook it.  If you let it sit long enough you will actually see little sprouts popping out of the seeds.  Many people don't even cook sprouted quinoa and instead eat it raw.

One of the best parts of quinoa is that it's flavor is very mild, so it will taste good with anything.  My kids' favorite way to eat quinoa is with tomato sauce and parmesan cheese as if it was pasta.  Here are some of my favorite quinoa recipes.  Enjoy!

Boil 4 cups of water and add the quinoa.  Bring to a simmer and cook for 20 minutes or until water is absorbed.  While the quinoa is cooking, remove leaves of kale from stem and rip into tiny pieces.  It is very important that the kale is torn into bite sized pieces and massaged, otherwise the raw kale can be difficult to chew.  Put the kale at the bottom of a bowl and pour the hot quinoa directly onto the kale which will slightly wilt the kale.  Add the cranberries and sunflower seeds and mix together.

Combine the juice of two oranges, the juice of 1 lemon, 2 tablespoons of honey, the olive oil and the apple cider vinegar.  Mix together and pour over the quinoa.

Preheat the oven to 425.  Boil 4 cups of water and add the quinoa, reduce to a simmer and cover for ten minutes.  Place the cooked quinoa in a bowl.  Chop up the basil and put it aside.  Chop all the vegetables and place in a baking dish.  Toss lightly with the grapeseed oil and place in the oven until the vegetables are softened but not overcooked, approximately 20 minutes.  Combine quinoa, vegetables, balsamic vinegar and olive oil.  Top with chopped basil.

Boil 4 cups of water and add the quinoa, reduce to a summer and cover for ten minutes.  Place cooked quinoa in a bowl.  Place spinach, basil, sunflower seeds, olive oil, garlic, and parmesan cheese in a cuisinart until you get a smooth consistency.  Toss pesto sauce with quinoa.  Chop the roasted red peppers and pour on top of the quinoa.  This dish is delicious hot or cold and a vert welcome addition to any summer BBQ as a side dish.