WHAT IS IT LIKE TO DINE OUT WITH A MOM WHO KNOWS TOO MUCH? An Essay By Beth Beisel 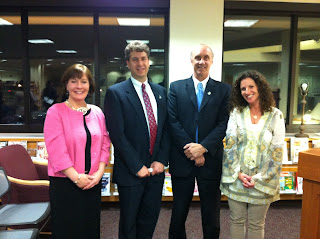 Below you will find a passionate, heartfelt, brilliantly written essay by my good friend Beth Beisel.  On February 22nd I showed up in Hartford to offer testimony in support of the GMO labeling bill.  This being the first time I ever testified at something like this, naturally, I was a little nervous.  But, I had the universe on my side that day because standing right in front of me was Beth, who immediately calmed my nerves with her kindness and positive energy.  We introduced ourselves to each other and I immediately felt a connection.  Clearly synchronicity at work,  Beth and I knew we would be working together going forward.  Two weeks ago Beth and I did a successful talk at the Farmington Library.  After Beth read my vacation blog a couple of days ago, she was reminded about this essay she wrote when reflecting about her dinner out with her son.  I asked her if I could share it with all of you because it is a very powerful piece.  Enjoy!

A registered dietitian/ non-GMO activist/ loving mother describes a dinner out, with her son.

“Mom, when are we going to go out for Hibachi?  You promised me 9 months ago.”

Well, life has been busy and hectic, but he did have a point and I did have guilt.  It seemed like tonight would be perfect; just my 10 year old son and me.  My two daughters and husband were away for the weekend.

I called a new hibachi restaurant in town to make reservations.  I asked the manager if I could bring my own oils, because we avoid soy.  His response was “we don’t use soy oil, we use vegetable oil”… (mix of genetically modified oils: soy, corn, canola, cottonseed – but most of you already know that).  Anyway, he said they would accommodate my own condiments.

When we got there, I took my bottles out of the back seat and my son said, “oh mom, no…please!”  Again, I would be an embarrassment to him.  I explained that the manager had already told me that it was ok. (The look of distress on his face didn’t change.)

We went in and sat down.  There was another couple sitting at our grill.  The woman’s eyes widened and she said, “you bring your own condiments?”  I tried to play it down for my son’s sake, but wanted to answer her the way I usually do – with a passionate explanation about genetically modified poisons, etc.  Instead, I told her the olive oil I brought was not extra virgin, and the flavor was so mild it shouldn’t change the flavor of the food too much; in case she got some of ours mixed in on the grill.  Luckily she was accommodating.  My son looked a little sad, and asked me if we could just this once eat the regular stuff like everyone else. (I guess last night’s dinner discussion about the GMO-fed rat’s testicals, that were shriveled up like raisins, didn’t have as much of an impact as I had intended.)  I told him someday he would look back and be proud that he had a mother who had convictions and was an activist fighting protect the health of her family and friends.

On the chef’s prep tray, I could see a bowl full of yellow fat.  He asked me about my oils and I said yes, I would prefer it if he used them, but that his butter would be fine. He said, “That’s margarine”.  “Oh, that’s not fine”, I said.  But I wanted to say, “You mean partially hydrogenated, genetically modified, heavily pesticided plastic???”  (At this point, I wanted to run across the street to the grocery store and buy some butter, but I couldn’t leave my little boy alone.  Only last week, when my family was out to breakfast and ordered pancakes, did I leave the restaurant to buy some real maple syrup – so they wouldn’t pour high fructose corn syrup all over their pancakes.)

The chef began to prep the grill and realized it wasn’t hot yet.  He apologized, and left us, so the grill could heat up.  A few minutes later, he came back with a conciliatory bowl full of edemome – roasted SOYBEANS.  My son’s mouth was watering.  He was starving.  He had just run around the basketball court for an hour and he was looking forward to a fun dinner out with his mom.  How could I not let him eat those things?  As I watched him pull the beans out of the ROUND-UP laden pods with his teeth, I closed my eyes and uttered this prayer:  “Dear God, please don’t let this evening out with my baby cause him infertility, development of some horrific allergy or gluten sensitivity, brain, pancreatic, or colon cancer, or any other problems we might not know about yet. And God?  I really don’t want to get sick either, especially while my children are still so young.  I love my life with them and want to continue raising them with strength and good health.  Also God, my beloved husband is in Pennsylvania with our two daughters.  Can you please make sure no one is feeding them genetically modified foods?  Thank you so much.”

“Are you ok mom”?  I told him I was fine, just saying grace.   Once the exciting part, the grilling/show got started, I tried to relax for his sake.  (The sake the chef squirted into my mouth helped, and so did the fact that we caught the chopped pieces of (?GMO?) zucchini he tossed into our mouths.) I wondered about all the spicy sauces he put on everything, and hoped the ginger and garlic would somehow offset the harmful effects of the other stuff we were eating.

The rest of the night went well.  We paid and went home.  He still lets me cuddle with him before bed.  I try to take advantage of it, knowing it will end all too soon.  I uttered more prayers, asking God to protect my family from evil people like our current “food safety” czar, and held him until he went to sleep.  I left his room and sighed, knowing that tomorrow and tomorrow and tomorrow he would be at some friend’s house or a school function, and some kind, unknowing person would share something with him – something that I would never let into my house.  I sighed again, knowing that all I can do is my best; that the rest is out of my control.  Then I took a deep breath and turned on my computer to the webinar I had missed – the one IRT is promoting on becoming a non-GMO speaker.  This is a fight I will not lose.

By Beth Beisel
Posted by Tara's Real Food For Real Life at 6:12 PM